The day of the race for 1 hour before the race: Boitsfort racecourse (chaussée de la Hulpe, 53 – 1180 Uccle)

The organisation stimulates the choice for public transportation. Underneath, you can chose your most efficient and ecofriendly way of travelling.

How to get to the racecourse

The nearest train station is in “Boitsfort”

The nearest tram station is in “Hippodrome de Boitsfort”

Will be called to the podium

The podium will only be provided for the first of each timed distance men’s and women’s category*.

*if event’s rules have been respected by the concerned participant

*participant have to be present or represented to recieve the price

The organization of the Trail du Meyboom will not impose the Covid Safe Ticket. The event will not gather more than 1500 people at the same time on the start/finish site (hippodrome of Boitsfort) because of the schedule. The site has the advantage of being very spacious. This does not prevent the application of the barrier measures that will be in force at the time of the event. The organization plans to use disinfectant gel in strategic places and will follow the catering protocol for the restaurant area after the effort. Good preparation to all.

The following measures will only be activated if necessary:

1) Each participant, volunteer, supplier or person in charge present at the event is required to carefully read the COVID-19 prevention guidelines.

2) Pre-registration is compulsory. No registration will be possible on site. Distances that have reached the maximum number of participants will not be accessible in the form.

3) Wearing a mask is mandatory at the start/finish site. The mask can be removed during the effort but must be kept on (in a pocket or backpack). Social distancing measures must be respected (delimited perimeters are provided in the start boxes).

4) The temperature of visitors will be checked by means of an infrared forehead thermometer at the entrance to the site. Anyone with a fever will not be allowed to participate and enter the site.

5) Only participants, volunteers and suppliers will be accepted on the site. Spectators are not accepted to give priority to participants and to take into account the maximum number of people allowed for an outdoor event.

6) A roundabout direction “entrances” and “exits” will be signposted to avoid untimely crossings. When collecting numbers and medals, at the check-in and in the start/finish areas a distance of 1.50 metres must be respected in the queues.

7) Each participant must bring his/her own cup (or foldable cup) or remove the personal cup ordered to be served at refreshments on the course or at the finish. Food at refreshment stations for distances over 10km will be packed and individualized (no bulk).

8) Only toilets will be accessible during the event at start/finish. There will be no changing rooms or showers. Handles and surfaces used by participants will be disinfected regularly.

10) Failure to comply with the COVID-19 rules in force on site or which will be put in place by the competent authorities will lead to immediate exclusion from the event.

The event is subject to possible adaptations according to the evolution of the measures decided by the National Safety Committee during the COVID-19 period.

((Vide)) The CNCD 11.11.11 (National Centre of International Cooperation) fights for a fair balance between the North and the South and funds every year over 50 development projects carried out by its members associations in the world poorest regions. The theme of social protection is being put forward for two years in a row through awareness-raising, advocacy and fundraising actions. Get sponsored for the South projects 11.11.11!

Run to help Haitian women and their families escape poverty
“Passing the gift” is the experience of guarding domestic animals set up by AFLIDEPA, partner of “Entraide et Fraternité”. The principle is as follows: every young girl / woman receives a domestic animal (cow, goat, …) for a fixed period during which she takes care of the animal whose milk and / or offspring she keeps. At the end of this time, she returns the animal to the organization, which then “lends” it to another person.

Women learn the profession of breeding, previously reserved strictly for men, and derive an income from the sale of milk. This will enable them to pay for their children’s schooling, a priority for Haitians. Schools are rare and far away. In addition, each family has to pay all the school fees of their children, which is a huge obstacle to schooling.

Thanks to the donations collected, the AFLIDEPA organization will buy cows that will be entrusted to new women to train them in this trade and help them to be financially independent. A beautiful solidarity project that allows these women to support their families but also to send their children to school. “Every year, what a pleasure to discover or rediscover the bucolic side of Brussels. For provincials like me, it’s very interesting to run in this green part of the city.I usually say that this event lives 3 times: preparing it, running it and reliving the race past the finish line”. (Fernand, rider in solidarity on the 21km)

You can easily create a personalized collection page via our website and easily communicate with your family on the project you support!
Each sponsorship can make the difference between misery and a dignified life for Haitian peasant families. Thank you! Register now!
Registrations will be open soon. 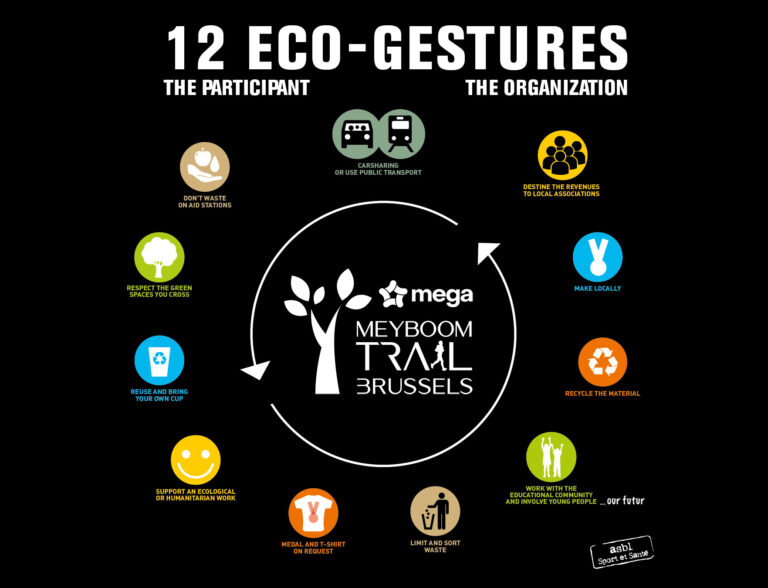 Our organisation tries to organize an event that is as eco-responsible as possible. Although there is still a long way to go, the bar is set a little higher every year. The 12 eco-gestures, shared between organizer and participants, are the ecological roadmap of event.

Carsharing or use public transport: We want to aim for the lowest possible carbon print and the travel of the runners to the event is the biggest concern. In addition to stimulating the use of public transport and carpooling, the event invests in the purchase of more than a thousand metro/tram tickets.

Don’t waste on aid stations: this is a piece of advice that is given to the runners but also applies to the organizers. After the last runner has passed, excess stocks are either used on another supply or passed on to an organisation such as the Salvation Army that fights against poverty.

Respect the green spaces you cross: Brussels Environment with its Walloon (Eaux et Forêts) and Flemish (Natuur en bos) sisters ask the users of the forest to respect the fauna and flora, for example by staying on the paths provided by the organisation.

Reuse and bring your own cup: finally zero waste supplies! Just bring your own cup or folding cup (obligatory equipment) to avoid thousands of cups on the ground. It’s a trademark of the Trail of the Meyboom: take your personal cup to be served at the refreshments on the course or at the finish (buffet or final snack).

Support an ecological or humanitarian work: the Trail of the Meyboom, via the ASBL sport et santé, directly supports several organizations (Unicef, CNCD, Vivre Ensemble …) but the runners also have the possibility via the registration form to make a donation to a good cause.

Medal and t-shirt on request: in order not to produce unnecessarily, medals – for example – are optional.

Limiting and sorting waste: Brussels Cleanliness, partner of the event, allows sorting and composting waste. Selective sorting is therefore planned in the village and at the refreshment Reusable and returnable cups will be available in the tent. Participants who use the selective sorting could be rewarded. Surprise.

Recycle the material: the advertising tarpaulins are transformed into storage bags or “original” bags given to the winners of the races.

Make locally: it is not easy to produce everything locally but we try. We favour local production. Trophies, for example, are made locally.

Destine the revenues to local associations: for each t-shirt worn, 1€ will be given to Natagora which protects biodiversity. Scout units or the non-profit organisation Vivre Ensemble are also supported to compensate for their support to the event.